Wow! I'm a guest blogger on Don't Get Bored! I'm just tickled by that for a few reasons. First, because last June when I moved to Kuna from North Idaho (where one does not need a great blog like this to find awesome outdoor things to do), Amanda and Don't Get Bored saved my children's summer. We haunted her blog for ideas, and then followed her footsteps all over Treasure Valley.

Second--I don't even blog! So I'm a guest blogger before I'm even a blogger blogger. Well, okay, I did keep a pretty invisible blog on Vox for a while, just logging all the sightings of twins we had after the babies were born. They'll be two in May 2011. Also with us on this trip were the Dad, Brett; my son Nate, 15; and daughter Anna, 11.

Finally--I found something really cool that Amanda didn't already know about. So I get to repay her a little bit. 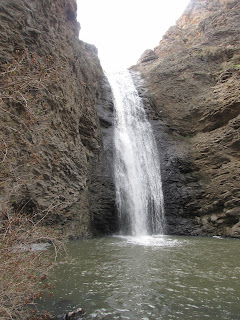 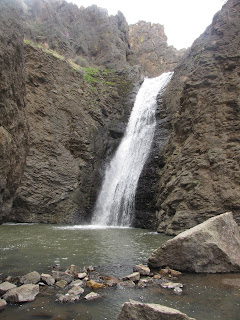 We headed out toward Marsing on an unseasonably beautiful March day. The drive took us through Idaho's vineyard country, which will be even nicer a few weeks further into spring but was pretty even with the leafless vinyards and orchards laid out across the valley. It's a bit tricky to get to Jump Creek. Our GPS was utterly confused, and MapQuest kept telling us to turn right when our gut said we needed to be going left. We followed our gut and found ourselves at a fork in the road with two choices--left on a very rutted, dirt road; or right through a cattle guard marked with huge NO TRESPASSING signs. After a short discussion, we chose the cattle guard, and there was a brief Deliverance-like interlude before we realized that we were on the right track, on a public road, and the warnings to trespassers were aimed at foot traffic. Apparently, folks hiking BLM lands in the area don't always respect fences around adjacent private lands.

I found directions on the Internet, and was able to put together an accurate set from those and our experiences, which appear at the end of this entry. 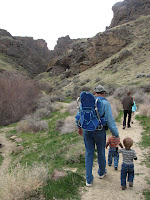 It's interesting how quickly the drive goes from vinyards, to slightly rolling desert, to this sudden lava-rock crevice with a creek flowing through it. We pulled into the parking lot, unloaded, and headed up the trail into the canyon. The kids enjoyed finding caves, looking for lizards, and spotting small fish in the creek. The hike itself is short, not even a quarter mile, and mostly on a flat path with a bed of sand and small gravel. We had the backpackers for the boyos, who are 21 months old, but we never needed them. We just let them walk. 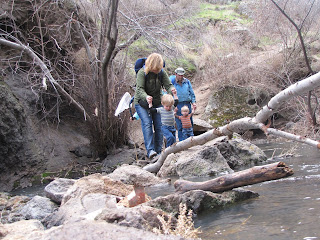 The only tricky bit was the creek crossing. The path drops down to the creekbed, where closely-set stepping stones cross the water about 12 feet wide and 8 inches deep. Nate went ahead and reported to Brett and me about the status of each rock, so that we knew to avoid wobbly ones while helping the boyos cross. It was dicey enough to knot my back a bit, but really, we were fine. Then a quick scramble upward, and we were back on the easy level trail.

I will note that I'm pretty intrepid; this crossing would not be suitable for all moms of toddlers. But we made it just fine and continued up the creek trail. Older kids--certainly 4 and up--will be fine.

The scenery was startling--not only the suddenness of the canyon itself, but the large caves and strange rock formations. This near-perfect pyramid looked like a carefully groomed Christmas tree, and was probably 30 feet tall.  With the layer of spring green on everything, the contrast between lava rock and growth bed was striking. 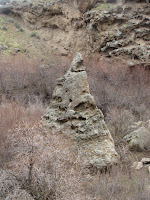 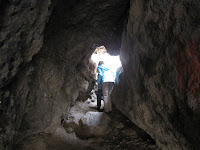 And at the end of the trail--this wonderful waterfall drops into a pool. There's a cave to clamber through for another view.

As early as it was in the year, we did see people; from the looks of it, there are always people here. There's some graffiti to overlook, and I've read that Jump Creek (not surprisingly) attracts the aimless among young people, who go there to drink a few beers and do other things they think will make them feel and seem mature. However, we saw only a family fishing with their dogs, another family hiking, and what looked to be a small private school group on an outing.

The kids can't wait to go back. We give it four and a half stars out of five (dang that graffiti!) and plan another outing a bit later in the spring. 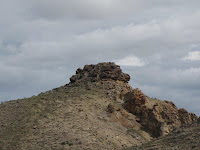 Stuff to take: Sunscreen, water, good shoes, maybe an extra pair in the car in case you get wet on the crossing (Anna did), and a picnic. There's not much in the way of picnic facilities, but it's a 45-minute drive or so, so this is at least a half-day outing. Oh, and a camera! I'm not sure the fishing is worth much, but if you're an angler you might want to drop a line, so be prepared for that. Nate really wished he had his rod with him. 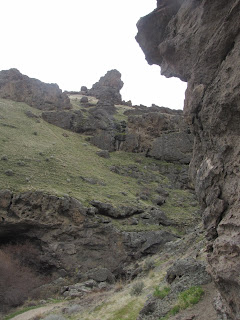 From Boise, take I-84 W toward Marsing, exiting onto ID 55 S at exit 33A. Stay on ID 55 S for about 16 miles (more or less), until you see Edison Rd; about a mile later you will turn left onto US 95. From there it's about 2.5 miles to Poison Creek Road on the right; follow Poison Creek Road about 3.5 miles to a 4-way intersection (you are on some very small roads here, so keep that in mind when you picture "intersection") and turn left onto the unnamed gravel road. About a half mile down that road, you will turn right through a scary-looking cattle guard; the threatening signs are for the private property only, not the road, which is public access to the canyon area. You will see the road turning left along the base of some hills; once you make that turn it won't be long before you see the Jump Creek sign directing you to the trailhead parking lot.

This is a great hike to do with a small family. However, be aware of the poison ivy along the trail in spring and summer.

All Sean are awesome so much pretty natural greenery.

I just learned of this place and I found your blog! Very cool blog!

Newer Post Older Post Home
Subscribe to: Post Comments (Atom)
Hello friend,
I started Don't Get Bored in Idaho as a guide to help me find new places to explore and new things to do with my kids. I needed something to help me when my kids would ask, "Mom, what are we doing today?"
Here's my solution to that question. In one place I have LINKS to different websites and local activities that help me plan out our week. You can find these in the right hand column. Besides the links to various places, I also blog about my experience in hopes that it will be useful information for you. I've placed a star * next to any places that we have been to and blogged about.
If it has a star next to it, check the LABELS in the left hand column for my blog review. If you are looking for things to do this summer check under the label of "Summer" to get some ideas. You don't want to get bored in Idaho.
Your new friend,
Amanda
P.S. I have a few talents, but photography is not one of them. Please excuse the crappy photos.